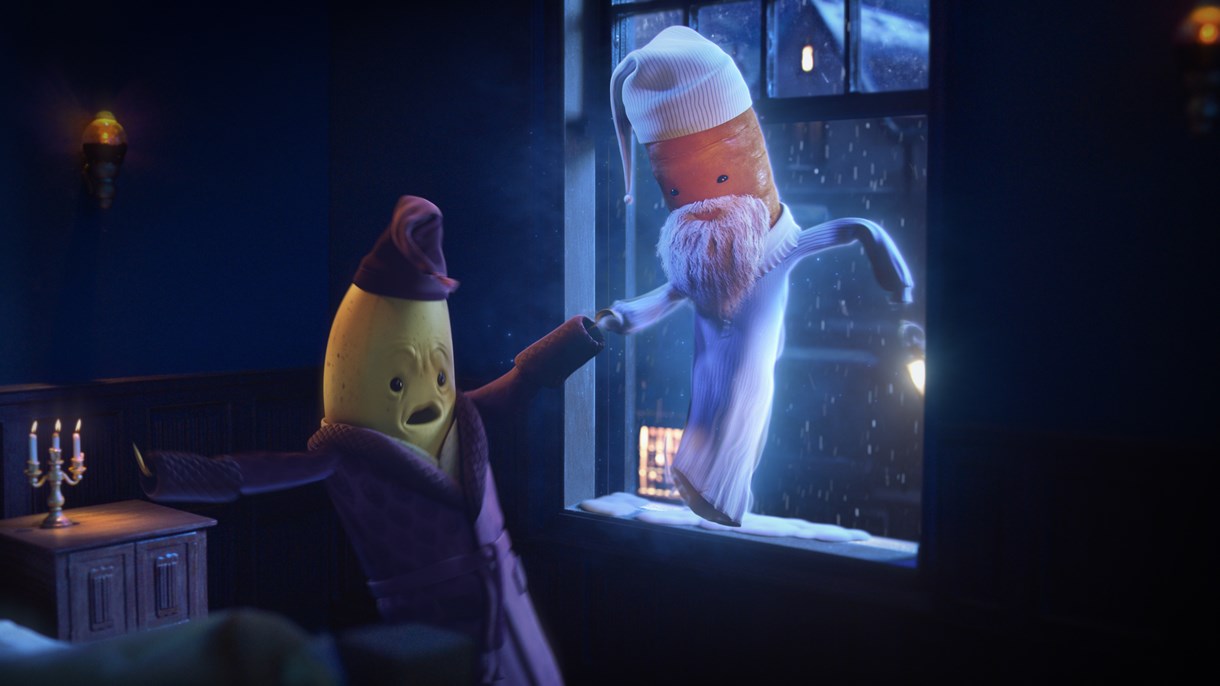 England footballer Marcus Rashford MBE has joined forces with supermarket giant Aldi for its Christmas TV ad - as part of a seasonal campaign which will see 1.8 million meals donated to families that need help across the UK over the festive period.

Created by McCann UK, the ad, which premieres on Thursday 11th November, is a charming Dickensian-style take on A Christmas Carol, and follows the story of Christmas loathing Ebanana Scrooge, who is reminded of the joys of the festive season by Kevin the Carrot who returns to screens once again this year, despite rumours to the contrary. There was public outcry when a teaser video featuring only Ebanana Scrooge appeared on social media over the weekend, leaving fans fearing for the fate of the nation’s favourite carrot.

The animated Yuletide story introduces viewers to a medley of fruit and vegetable characters - including Marcus Radishford, which is voiced by the England striker, Marcus Rashford, as well as Tiny Tom, Peas and Goodwill and Kevin’s Dickensian family.

Marcus, 24, who has told of his own impoverished childhood in Wythenshawe, Manchester, has waged a high-profile campaign over the past 18 months to increase the support available to vulnerable children.

Marcus Rashford MBE, said: “As a family, we relied on the local food bank to get our Christmas dinner. To this day, I remember queuing outside that building with mum; mum feeling embarrassed that she might be recognised. It is with that in mind that I’m delighted to lend my support to the Aldi campaign.

“For many children in situations like mine growing up, there is very little expectation around this time of year; add the impact of the pandemic and the very least they deserve is a Christmas dinner.”

Aldi currently works with Neighbourly - who link businesses to charitable organisations in local communities – to donate its surplus food to local causes.

Neighbourly CEO, Steve Butterworth, comments: "We're delighted to be supporting Aldi in their year-round food redistribution programme and in their commitment to donate 1.8 million meals this Christmas. These donations will help a record number of families across the UK during what is expected to be the busiest year on record for local charities and causes."

This is the sixthccessive year that Aldi’s Christmas ad campaign has featured Kevin the Carrot, with last year’s ad campaign racking up over 5 million views online.

Sean McGinty, Marketing Director at Aldi UK, said: “Christmas is a time for hope, and we’re privileged to be working with Marcus, who is one of the most inspirational young people in the UK, having done so much in the past 18 months to help provide free school meals for children.

“At the same time, it wouldn’t be the festive season without Kevin the Carrot on our TV screens, and we’re thrilled to be bringing him back for the sixth year for his many fans, in what we think is his best Yuletide performance yet. We hope our campaign will remind everyone of the true meaning of Christmas.”

“At Aldi we have an award-winning range of products that will give shoppers everything they want throughout the festive season and we know that people are desperate to be together again this year. With products such as our Specially Selected Hand Finished Bronze Turkey, Vegan Festive Wreath and Gold Flake Gin Liqueur, and all at the lowest prices that Aldi is famous for, customers will be assured throughout our campaign that Aldi can help them have an amazing Christmas with loved ones.”

On the re-appearance of Kevin the Carrot, McGinty added; “Every year the anticipation for our most famous brand asset builds and this year Kevin gets to help a new character, Ebanana Scrooge, discover the true meaning of Christmas. It’s a play on a famous tale linking to the Christmas traditions that we know customers love.”

Dave Price, Chief Creative Officer at McCann Manchester, part of McCann UK, said: It took nearly a year of searching in Monty Don’s library, to unearth this classic vegetable tale. A Christmas Carrot by Charles Chickens. Now everyone knows Dickens ripped off Chickens about 20 years later, but few people know the original story. A humble carrot takes a rotten banana on a journey to find turkey, pudding and the true meaning of Christmas. This is Kevin The Carrot’s 6th adventure and we’re really hoping that he, along with this original Charles Chickens tale, will be everyone’s favourite this Christmas.